5 Common Challenges That Can Be Solved With an AODD Pump 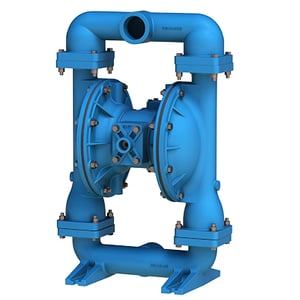 Air-operated double-diaphragm (AODD) pumps are a versatile tool that can be used to solve many problems other pumping technologies create due to their inherent design. In this blog, we’ll discuss five common challenges that can be solved with an AODD pump.

While this doesn’t appear on the surface as a significant issue, it can lead to many problems within your system. Frothing, or small air bubbles in the product, can promote cavitation and oxidation. Additionally, it can even change a product’s chemical properties.

There are many causes of frothing during the pumping process, the most common being air introduction via fittings or seals. If ignored, this can lead to performance degradation over time and, ultimately, failure of pumping equipment and measuring devices.

Like many other technologies, AODD pumps can succumb to air introduction through leaking fittings and seals. That being said, the gentle reciprocating movement doesn’t promote the frothing like fast-spinning centrifugal or tight tolerance gear pumps.

As most positive displacement pumps (gear, lobe) work on the same principle, this creates a volatile area where high and low pressures meet. When moving emulsions or non-Newtonian fluids, it’s critical to research your pump and its fluid dynamics to avoid separation or product degradation. AODD pumps are equipped with positive seals (ball and seat) preventing this backflow of product, reducing this risk.

As the pump continues to operate, it builds both heat and pressure. When heat builds, it can ruin expensive mechanical seals very quickly. On the pump’s impeller side, it continues to build pressure until something in the line or pump has a catastrophic failure.

AODD pumps are 1:1, meaning the air inlet pressure equals the fluid discharge pressure. When a valve is closed or a line becomes clogged, the discharge pressure equals the head pressure and the pump comes to a stop. It’s not until the head pressure is released that the pump will begin stroking once again. AODD pumps can do this without damage. There is no seal to burn up and no necessary accessories to buy in this event.

AODD pumps typically range from ¼” to 3” porting with weights up to 245 lbs, putting them on the smaller side of the pump spectrum. Since the size is smaller, and there is no need for laser alignments or permanent mounts, it makes for an ideal location on a hand cart or truck bed.

While the versatility of being able to move the pump is great, versatility also refers to how easily the pump can be applied. AODD pumps can be run anywhere on their performance curve with an easy adjustment of air inlet pressure (0 to max). No need for an external PLC or variable drive, AODD pumps are used in the production of everything from food and beverage, pharmaceuticals, chemicals and everything in between.

The upfront cost is generally lower for AODD pumps compared to other like-sized technologies. Most require either gas or electric external drive, increasing the total cost. While the drive motor may last, the wear components such as impeller and mechanical seals are designed to have a set service life. AODD pumps have easy-to-install elastomeric wear components (diaphragms, balls and seats) to help keep downtime and cost minimal.

While it's known that AODD pumps can’t handle all duty points, they do provide an outstanding option for companies to explore that have historically used another pumping technology.

Find Out Which Pump is Right For You.

SANDPIPER AODD pumps deliver industry-leading durability and performance. We offer the broadest range of products for a wide variety of applications. Contact a local distributor to find a SANDPIPER pumping solution that’s backed by superior quality and workmanship.